The MAVEBA Workshop will take place in the Sant’Apollonia Auditorium , Via San Gallo 25a, Firenze, Italy.

The Sant’Apollonia complex is a former monastic complex in the historic center of Firenze, located between via San Gallo 25-27-29 (former church and chapel, used as an auditorium and conference room), via XXVII Aprile (entrance to the Museo del Cenacolo di Sant’Apollonia) and via Santa Reparata (entrance to the cloister).
The monastery was founded in 1339. From 1440 on, the abbess Cecilia Donati promoted a series of modernization and enlargement works of the cloister and the cenacle frescoed on the entire west wall by Andrea del Castagno in 1447.

The cenacle (refectory) is a large rectangular room with a coffered ceiling and a series of windows on the right wall, frescoed on the entire west wall by Andrea del Castagno in 1447.  The subject is the Last Supper a theme widely used for the rooms where monks or nuns ate their meals. The fresco is composed of a central part, where the Last Supper is located along the entire length of the wall and an upper part where, interspersed with two windows, are (from left) the scenes of the Resurrection, Crucifixion and Deposition. Due to the cloistered life of the nuns, the cenacle was completely ignored by historians.

The discovery came only after the suppression and requisition of the convent in 1864 for military use. A part of the convent was in fact demolished and many rooms were transformed into offices or homes. Only after the Second World War the structure passed to the Universita’ degli Studi di Firenze. The frescoes at the time of the discovery of the cenacle (1861) were dull with a white plaster, which is why they are worse preserved. In 1953 it was decided to remove this upper part because it was deteriorating due to humidity, and on that occasion the significant sinopias were found, which, although detached in 1961, were placed on the opposite wall.

Among the works of other authors are a Pietà and a Crucifixion with sinopia by Paolo Schiavo pseudonym of Paolo di Stefano Badaloni (from the monastery), a Madonna and Child with saints (from the monastery church) and a Coronation of the Virgin and saints by Neri di Bicci, a tabernacle of the Florentine school of about 1470. 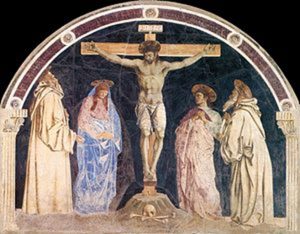 Other works by Andrea del Castagno are the Christ in piety supported by two angels with sinopia (1447-1448 approximately), coming from the cloister of the monastery, and the sinopia of the lower part of the Trinity and saints of the Santissima Annunziata. 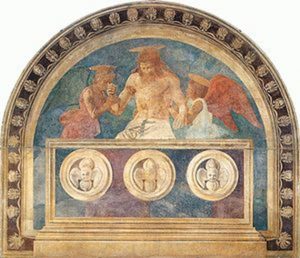 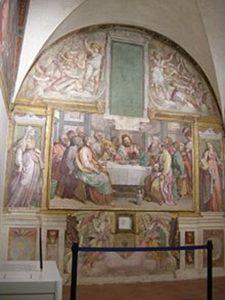 Also in the refectory hall are the few remains of the frescoes of Sant’Egidio, a key work of the early Florentine Renaissance by Domenico Veneziano, Andrea del Castagno, Alesso Baldovinetti and Piero della Francesca unfortunately lost with the sixteenth-century renovations of the church.
Hanging on the south wall is a Crucifix attributed to Baccio da Montelupo. 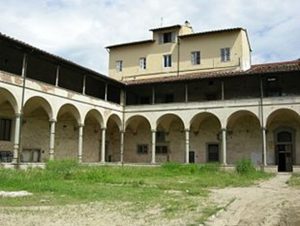 The cloister of the Abbess

In the Museum of the cenacle of Sant’Apollonia there are also other fifteenth-century works from the former monastery and hospital of Santa Maria Nuova, by Paolo Schiavo, Neri di Bicci (two tables) and the few traces of Domenico Veneziano’s frescoes and sinopias, with the help of Alessio Baldovinetti, Piero della Francesca and Andrea del Castagno himself, with the Stories of the Virgin, formerly in the church of Sant’Egidio.